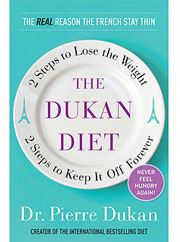 The Dukan Diet is a weight loss strategy based on increased protein consumption as well as following four stages of food and lifestyle changes. It became exceptionally popular when many A-list celebrities started following it, including Kate Middleton when she was preparing for her wedding to Prince William.

What Does the Dukan Diet Involve?

When following the Dukan Diet, there are certain foods that are allowed at various times. It can be quite restrictive, but the claim is that during the first two to seven days, someone who follows it very closely will lose between 4.4 and 6.6 pounds. That number is based on the diet’s own claims and dieter feedback but has not been backed by scientific study.

The diet itself is laid out in an official book, which has sold well over 7 million copies. Moreover, there is also an official website which offers dieters additional support. By repeating the strategy and stages of the Dukan Diet, the idea is that a dieter will be able to keep up a rate of 2 to 4 pounds of weight loss each week. A central component of this diet also requires you to cut back on your carbohydrates, particularly in the earlier stages.

Flexibility in Your Strategy

The company behind the diet allows dieters to either choose to make their own foods based on the rules, to purchase pre-packaged foods designed to make it easier to stay within the restrictions, or to do both. That said, there is no requirement that dieters purchase the pre-packaged foods. There is a preference for learning to cook your own foods for the various phases, while using the packaged options more to keep up with the diet when you’re too busy to make your own meals.

What Are the Dukan Diet Phases?

The phases of the Dukan Diet include:

During this phase, you can eat as much protein as you want, choosing from 68 possible animal-based protein sources. The book claims this phase of the diet will boost the rate of weight loss while decreasing the amount of water held by the body’s tissues. For this phase, dieters will also need to drink between 6 and 8 cups of water per day and take 1.5 tablespoons of fiber – preferably oat bran fiber – to help reduce calorie absorption and shrink the appetite. This phase lasts for about a week (though this changes depending on the goal weight) and involves the introduction of exercise, usually in the morning.

Throughout this phase, the dieter is supposed to lose one pound per three days. There is still a requirement for the same types of protein, but some veggies become allowed. Dieters can select from 32 different options. There are still no fatty veggies or starchy ones allowed. This phase requires the same amount of water, with 2 tablespoons of oat bran fiber each day.

This is the phase that works to keep the lost weight off, offering additional dieting tips. In addition to being able to eat the same foods as the previous two phases, some new foods are also allowed, such as fruit, cheese, some starchy foods and bread. During this phase, you can have 2 meals per week that can deviate from the restrictions of the phase. Every time you lose a pound, this phase becomes 5 days longer. This is often the longest phase.

In this phase, you can eat however you want for 6 days each week, provided you follow the portion recommendations. Once per week, you need to eat according to the Attack phase. This is the phase that is maintained for the rest of the dieter’s life in order to keep up long term results.

Does Science Back the Dukan Diet?

As of the writing of this review, there hasn’t been much quality research conducted on the Dukan Diet.  That said, there have been a few limited preliminary studies.  One study conducted in Poland tracked women following that eating strategy. It showed that they ate around 1,000 calories per day and 100 grams of protein per day.  In 8 to 10 weeks, they lost an average of 33 pounds.

Other small studies have also shown that diets high in protein and low in carbohydrates can bring about rapid weight loss over the short term.

Does the Weight Loss from the Dukan Diet Last?

There haven’t been any long-term, reputable studies on the safety or lasting effects of the Dukan Diet.  That said, this type of eating style is often considered to be controversial due to the high protein intake it requires.  This is particularly true when considering bone health and the kidneys. People with healthy kidneys likely shouldn’t be concerned. That said, individuals prone to kidney stones could experience a worsening of their risk and their symptoms with this type of diet.

It is unlikely that most people would be able to keep up this type of eating strategy over the long term. Therefore, there is a risk of rebounding weight.